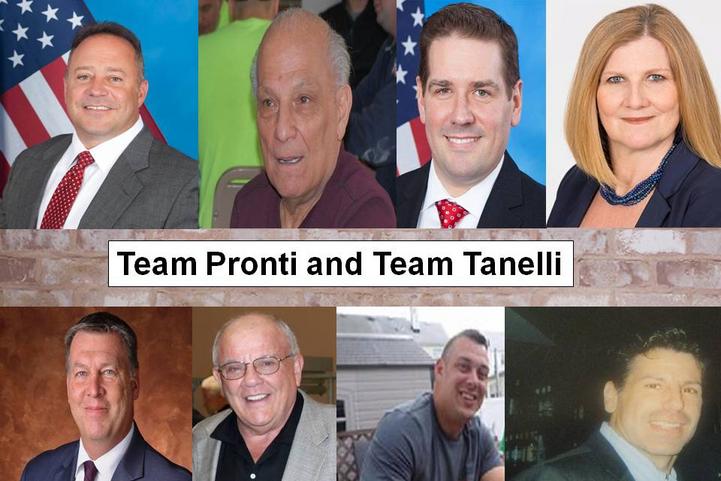 Links to candidate information. Click the box to go to the site

With less than 100 days to go before Election day. North Arlington has four people willing to serve the community and serve in the Councilwoman or Councilman position in the borough.

Running for office is not an easy task in today's polarized climate. The candidates deserve recognition for putting their names on a ballot and for being willing to serve. This won't be an ordinary election. It's one that also features the Presidential Election. Many people who do not VOTE in the off year of Presidential Elections will be coming out this year even with the pandemic underway. Folks want to get their say and be counted.

Vote By Mail saw huge increases across the state in voting. In North Arlington the ever vital independent VOTE did not participate in the primary elections. But trending indicates a large voter turnout for November. Either By Mail or at the ballot box.

So what does that mean for North Arlington. First off. There is likely to be huge voter turnout due to the Presidential Election and the two main parties each fielded two candidates for council. So before we talk about some of the issues facing North Arlington, re-development, the pandemic, schools re-opening,etc,etc. We need to meet the candidates and the teams supporting them.

So It's Team Pronti VS Team Tanelli.

So this year we have Team Pronti with GOP municipal chair James Bocchino at the helm of the local GOP. Along with help from Bellville Mayor Mike Melham who owns and operates Alpha Dog Solutions for the local GOP media operation.  Local Republicans are hoping for a repeat result of 2016 where Donald Trump beat Hillary Clinton in North Arlington. Nullifying any lead Democrats were hoping to get in this year's election 2020. It's also important to note that the local GOP has controlled local government since 2015.

There is also a Republican renaissance of sorts led by TEAM Pronti. Since winning the Mayor ship. Mayor Pronti has carefully selected candidates who share his vision for the borough. This is not the party of longtime GOP and former Mayor Len Kaiser. It's a very different group led by Mayor Dan and his mentor and long time GOP operative James Bocchino. The Mayor makes no bones about the direction he wants the governing body to follow. It's important to note that in Mayor Dan's first term as Mayor. Democrats(Mark Yampaglia and Jean Williams) voted almost in unison with the direction set by Mayor Dan and their Republican counterparts. The current makeup of the governing body now is a all Republican led one. The last time there was an all party led governing body in North Arlington. Democrats Mayor Massa, Councilman Tanelli, Spanola, Diblasi,Yampaglia,Ferriero and Granell served the community.

The two GOP candidates are sitting Council people. Donna Bocchino and Mario Karcic. Both candidates have interesting ideas on the state of the borough. They both have worked hard to implement Mayor Dan's plan for the borough. They can be seen at many of the community events and both have Council Facebook pages and we encourage you to reach out to them and ask questions to them directly. If your concerned about the issues facing the borough. You need to take part in the political process and hold people accountable for their vote and why they are voting the way they are. In this political climate. It's now more important than ever to be engaged and fight for the issues that matter to you.

The Democrats are led by Freeholder Steve Tanelli(Steve endorsed this year's candidates and fully supports the local Dem chair and their media presence NATODAY) , Nick Antonicello SR is the NA Dem municipal chair. Mr. Antonicello's son and former North Arlington School Board President Nick Antonicello Jr runs the media operation with his father running the www.natoday.net website and Facebook pages. Local Democrats usually do well in Presidential year elections and are hoping the 2016 election of TRUMP winning North Arlington was a fluke. Democrats are looking at this election to see if Mayor Dan Pronti has any real coat tails in this election cycle.

Democratic candidates Tommy Bradley and John Yampaglia are new to the political scene. This would be Mr. Bradley's first campaign as well as John Yampaglia. John is not new to the political process though. His brother Mark has served on the governing body for multiple terms as a councilman and Mark also ran for Mayor. These two candidates also have a view on the direction of the borough. Their team has a joint campaign Facebook page. As we encouraged with the GOP sites. We also encourage you to go to the Facebook page of the candidates as well and hold them accountable for their views and positions.

As with the issues of the pandemic. How North Arlington manages this is going to be a big part of the campaign this fall. Do we need to spend money on activities that bring people together to possibly expose them? What are the candidate views on the way the borough manages the pandemic? What about the school system and how is the town going to work with the NABOE to make school possible for our children?  What are their thoughts on the expansion of schools and programs by the NABOE? Safety for schools is still a majority priority.

Redevelopment. Before we start. The are several redevelopment plans for the borough. Porete and Ridge Road for example. It's important to note. That for redevelopment. That it just doesn't happen without anyone knowing. For example. The RIDGE ROAD REDEVELOPMENT Plan has gone thru several changes under many administrations in North Arlington and has been reviewed by the borough zoning, and planning boards as well as the governing body at many times over the years.

Democrats and Republicans while serving in that capacity have both voted in favor of the plan. If anyone was opposed to that plan and its contents. They certainly had an opportunity to speak on it simply by going to a meeting and speaking on it.  Anyone could call borough hall and ask teh clerk for the Planning Board Chair contact info and ask to be put on the planning board meeting agenda to ask questions about the plan. Former Council members, Mark Yampaglia, Jean Williams, Board member John Yampaglia, former Mayor Joe Bianchi, Mayor Dan Pronti as councilman have voted yes on that plan.  The existing plan had the entire current GOP governing body voted yes on it. You can OPRA this data for yourself. Simply call Borough hall and ask the clerk. You will need to fill out an OPRA form. You want who has voted YES on the RIDGE ROAD REDEVELOPMENT Plan.

No one is building condo complex's on sunset or hendel ave. The RIDGE ROAD REDEVELOPMENT Plan address's ridge road and Ridge Road only. The major question for the plan has always been a simple one. How do we enhance and develop Ridge Road? I encourage the governing body to make that plan available on the borough webpage. What are the candidates plan to enhance Ridge Road and redevelop it? What is their plan?

How do we manage parking in the borough? How does the Mayor and Council look to implement a plan to help residents with this issue?

What plans or views do the candidates have to implement new or enhance Senior programs and housing?

Tax and ratables. What are the candidate thoughts on the ratables they would like to see in the borough. How would they manage Taxes in the borough and manage a way to stabilize them for residents?

We hope there is a debate in the fall with these four candidates in a environment where the candidates can speak freely without any spin from their campaign leaders on either side. So let's have two debates and have the local newspaper. The Observer be the moderator. Residents could submit questions to the paper and the paper could have a Virtual zoom session where the candidates could reply to the questions.  An Independent third party if you will. No spin from WebPages, Facebook, partisan supporters or any other media. Just questions submitted and the Observer asking the candidates. I hope the Municipal chairs James Bocchino and Nick Antonicello SR can work this out. This Vote is important and people need transparency and the ability to get as much info on the candidates as possible.

Lot's to talk about before election day. Get Involved. Ask questions. Your VOTE MATTERS.